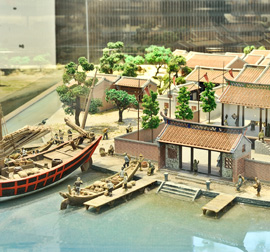 Twitter FaceBook GooglePlus Plurk Linkedin
Share
16
Themes：
Architecture
Sections：
Territorial Societies and Plural Cultures > Qing Dynasty Commercial Cities and Towns > The Second Largest Port during the Qing(Lugang)
Keyword：
Lugang,Luzaigang,Ri Mao Hang
Object description：
Lugang was formerly known as “Luzaigang”, and it was the territory of the Mazhilin indigenous tribe. According to legend, the Chinese settlers came up with the name “Luzaigang” because wild deer (pronounced Lu in Chinese) live there. This was one of the main ports for early settlers in central Taiwan. Guilds were formed by ship owners, water merchants and stores, and these played a crucial role in promoting trade under the Qing Dynasty. The most prominent guilds in Lugang included the Quan Guild, Xia Guild and Nan Guild, which were involved in cross-strait trade, as well as the Oil Guild, Sugar Guild, Piece Goods Guild, Dye Guild and Grocery Guild, which were involved in exporting specialty products. Together, they were known as the Eight Guilds of Lugang. In addition to trading, the guilds also participated in local affairs and became a powerful influence in the community.
Guilds usually opened up stores and storehouses on the streets near the port, and the model depicts Ri Mao Hang (now a shipping and trading company), the largest merchant building in Lugang during the Qing Dynasty. When the boats berthed at the port, the square in front of the building became an area for cargo delivery and temporary storage. The East Asian hip-and-gable roof in the square was used as a stage. Upon entering the building, one would be greeted by the storefront and living room first, as well as the attic used to store goods. The space to the left and right of the skylight was used as accounting room or warehouse. Going further inside the building one would see the ancestral shrine and main bedroom. There were also facilities, such as a classroom, stable, guestroom, dormitory and stage.
Reading：
1.臺灣大百科全書（鹿港日茂行），文化部，http://taiwanpedia.culture.tw/web/index，2012/11/13。
2.文化資產個案導覽（彰化縣鹿港鎮），文化部文化資產局，http://www.boch.gov.tw/boch/，2012/11/13。
Form：
Replica
Category：
Model 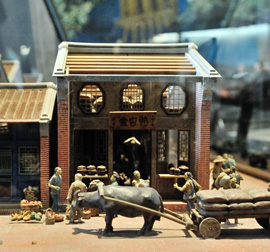