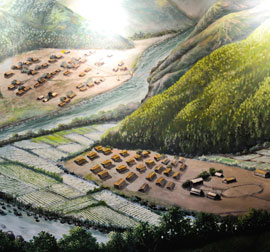 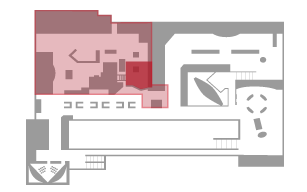 Twitter FaceBook GooglePlus Plurk Linkedin
Share
0
Themes：
Architecture
Sections：
Transformations and The New Order > Indigenes and a Modern Nation-State > Governance by Social Reformation and Lifestyle Transformation
Keyword：
Administration of indigenes, Sakuma Samata, Gan-nuoh, collective relocation
Object description：
During the early stages of Japanese era in Taiwan, the “Indigenous Policies” emphasized the development of camphor and forest resources, therefore a more forceful approach was adopted by continuing the methods of pacification and reclamation that had been carried out by the Qing Dynasty. The Governor-General in Taiwan, Sakuma Samata, relocated the indigenous population to within the barrier defense line and suppressed any opposition that arose. This caused frequent rebellions throughout the island . The Taiwan Governor-General’s Office in Taiwan eventually reviewed the “Indigenous Policies” after the Wushe Incident, and then worked change how the indigenous people lived, as well as how their villages were organized, in order to facilitate management and control.
In 1931, the “New Indigenous Policy Outline” was promulgated, and tribal collective relocation became the core of the indigenous policies, closely related to the so-called “nurturing measures”. Indigenous lands were merged and indigenous tribes were relocated to new areas allocated by the Taiwan Governor-General’s Office. Taking the Danan Village of the Rukai Tribe as an example, in 1925 it was relocated to Ilila, next to the Lijia River, and the villagers started cultivating paddy fields. The center of the village was the police station, to make it easier to monitor and control the local population. At the same time, “indigenous house” reconstruction also took place, establishing neatly arranged rows of dwellings. Transport infrastructure, such as roads and bridges, was also built, and moves were made to improve public health, with the setting up of medical organizations, toilets, public bathrooms, public cemeteries, aqueducts, and water canals, and the relocation of pigsties.
Collective relocation transformed the people’s original lifestyles, and they started planting paddy rice and engaging in other forms of production. In addition, self-governing bodies were created that held regular meetings, and schools were established provide education to indigenous children and others. However, such actions led to some conflicts with the people’s traditional ways.
Form：
Replica
Category：
Model 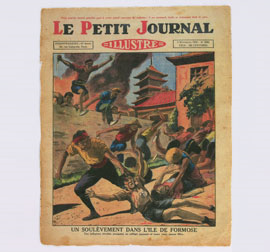 An Uprising on the Island of Formosa
:::