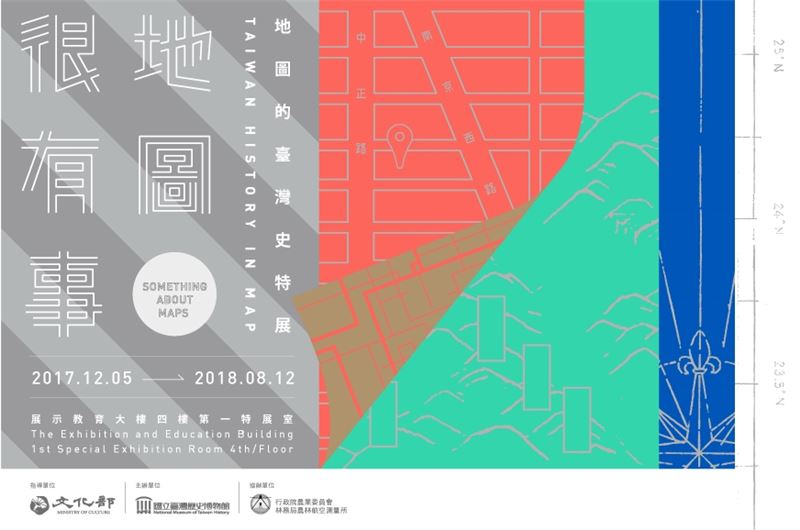 A map represents the spatial recognition of its cartographer and era, which often confine the worldview of those who use it. Throughout history, there have always been people who were unsatisfied with what was known of the world, and thus set out on a journey to search for a new world, an imagined ideal realm. As such, maps are often a product of people’s varied dreams and passions. Maps seem to be scientific and objective, but in fact are very human objects. The items marked on a map, like national borders, place names, meridian and parallel lines, and so on, are actually related to human will and human stories. In this exhibition, we take maps as a medium to represent the changes and development of Taiwanese society and to explore how they convey the social issues and concerns of their times.

The maritime era from the late 15th to 17th centuries marked overseas adventures and expansion for many European nations. In order to represent the new continents, the so-called New World, the field of modern cartography was developed. Mapping, to draw the world on paper, is a process of flattening the real geography. However, when the world is flattened in this way, people naturally want to reshape it and make it round it again. A flattened world map is thus cut and pasted onto a globe. In the past, people explored the world and then drew maps, expressing their own worldviews and spatial perspectives. Now we can read such antique maps and get to know the diversity of these new worlds from various aspects.

An Island along the Tropic of Cancer: Taiwan, Little Liuqiu, Formosa…

How did people begin to mark the position of Taiwan on a world map without Taiwan? Where was Taiwan located? Taiwan started to appear on Western maps after the mid-16th century, thus emerging on the stage of world history. On these early maps Taiwan showed up with different names, in various shapes, and at diverse positions along the Tropic of Cancer. There was no uniform standard. It was only after the 1620s, when the Dutch and Spanish came to Taiwan and obtained more details geographic information, that Taiwan’s image and location on maps started to evolve into what we now know, becoming an island crossed by the Tropic of Cancer.

Division between Fantasy and Reality: Indigenous-Han Boundary on the Island of Taiwan during the Qing Dynasty

In the Qing Dynasty there was a boundary dividing “the human zone” from the “aboriginal zone” on the island of Taiwan. Inside the former lived “cooked aborigines” and Han Chinese that had household registration, paid taxes, and served labor, while “raw aborigines” lived outside it. The rule of the Qing was only confined to the human zone, and Qing citizens were forbidden to cross the boundary by law. The government drew an imaginary, perfect line on maps to mark this, and also set up steles, dug pits, and piled up earth mounds on the actual ground to mark it physically. But the stone steles, pits, and earth mounds could not block the movement of people. In real life, the boundary actually marked a zone of active contact between the indigenes and Han Chinese. The boundary lines in various colors represent repeated demarcations and the moving frontier due to such interactions.

The Japanese government, after taking over Taiwan, quickly launched a project of surveying and mapping in order to achieve more effective colonial control and administration. Many accurate topographic maps, series maps, and thematic maps were completed at this time. As if holding a magnifying glass, the rulers of Taiwan were thus able to examine the island from head to toe, in detail. The purpose of surveying and drawing these maps was to gradually incorporate Taiwan into the territorial resources of the Japanese Empire for effective exploitation by the colonial government, and they exposed the multi-faceted nature of Taiwan to the world for the first time.

A Base for Anti-communist Restoration: Maps During the Cold War and Martial Law

After the end of WWII in 1945, the world entered the period of the Cold War, which was a political competition between Western nations, led by the US and the UK, and the communist nations headed by the Soviet Union. In 1949, the government of Republic of China retreated to Taiwan and became a link in the anti-communist chain in the policy of “containment” developed by the US. The Nationalist (KMT) government administered Martial Law in Taiwan on its arrival, which then lasted 38 years. In the context of the Cold War and Martial Law, both with the stated aims of working against communism, “anti-communists” and “reconquer” became ubiquitous slogans in daily life. Maps are always closely related to the political stance and propaganda of the ruling authorities, and thus these naturally became one of the “anti-communist and anti-Russian” propaganda tools in this era.

In the past, mapping was controlled by the current rulers whose perspectives and visions had an impact on the resulting products. Contemporary mapping is instead a democratic process. Ordinary people can express their individual opinions and feelings by means of maps, demonstrating their own characteristics and values. Through the various and often outspoken maps that have been produced in this manner, the diverse creativity and vitality of Taiwanese society can be revealed.

Farewell to Maps：Diverse Forms and Applications of Contemporary Maps

Contemporary mapping has become more and more diverse. Maps are used in different ways and closely connected with our daily lives. “Let’s Google it” may have already become the most common way to find a map for most people. We now create various “maps” from diverse viewpoints and themes, which have already broken away from the traditional form of maps on paper and are also forming a pluralistic worldview. Yet whichever form a map may evolve into, in our opinion, it is forever a representation of humanity. It is a concrete demonstration of mankind’s realistic or ideal world, which might be the real essence of cartography. Therefore, we conclude this exhibition with a quote from the famed British writer Oscar Wilde at the end of 19th century: “A map of the world that does not include Utopia is not worth even glancing at, for it leaves out the one country at which Humanity is always landing.”