The Superimposed South: Tainan as a Collective Memory 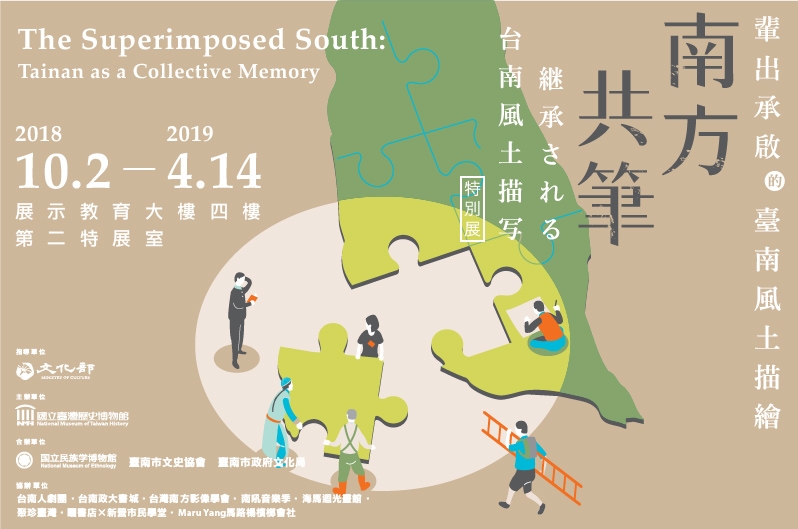 Located in southern Taiwan, Tainan is the oldest city on the island, as well as one of the earliest areas to have contact with the outside world. This history has gifted the city a rich cultural heritage, and many of those who have stayed, visited, or lived in the city have written about or captured images of Tainan, as it changed with different generations and groups over more than four hundred years. Generation after generation, these documents are not just the collective images of a city, but also the collective memory of Tainan.

In cooperation with Japan’s National Museum of Ethnology (MINPAKU), the Tainan History and Culture Association, and Tainan City Government’s Cultural Affairs Bureau, this exhibition gathers writings, notes, photos, and other works about Tainan from the predecessors of the Tainan History and Culture Association, as well as from Mr. Uchida Isao, a geography teacher who served at Tainan First High School – and whose records of Tainan are now a collection at MINPAKU. From these memories and stories of Tainan, from different times, we explore how the idea of Tainan is presented – and superimposed – along with the changes of time, space, and the city’s inhabitants.

Across four hundred years, the word “Tainan” has had different meanings as the city’s history has progressed. It has sometimes signified a great number of geographical districts and at other times only a relatively small area. Under Dutch rule, “Tainan” referred to the area centered around Fort Zeelandia, the town of Dayuan, and Fort Provintia, while under the Kingdom of Dongning, it was where Tianxing County and Wannian County met, before they were re-divided into Taiwan County and Zhuluo (Jiayi) County during the Qing dynasty. Later, in the Japanese period (1920), “Tainan Prefecture” was established and expanded into today’s Yunlin and Jiayi. After the Second World War, “Tainan” included Tainan County and Tainan City, until the two were merged and upgraded to a special municipality in 2010, becoming today’s Tainan.

Along with the changing physical concept of Tainan, the definition of a “Tainaner” has also changed. From a majority of indigenous Pingpu groups, to the Han people, the Japanese, mainland migrants, modern immigrant workers, foreign spouses, and people from different cities joining the population, new residents have all settled down in the city with their own “Tainan dream,” creating different images of Tainan that flow with the passage of time.

Since the 17th century, Tainan has been a critical doorway connecting Taiwan to the wider world. After certain Taiwanese ports were opened to international trade in the mid-19th century, western missionaries, explorers, businessmen, and foreign consuls flocked to the island to search for exotic experiences and possibilities, starting at Tainan. With diverse aims and cultural backgrounds, these visitors have left numerous records, describing their impressions of Tainan. During the late 19th century, the Japanese joined the procession of those documenting Taiwan for the purposes of ruling it. In addition to actual reconnaissance, the Japanese also gathered information about the island through local scholars in Tainan, which, in turn, further helped those scholars to better understand their own homeland via the process of collecting local knowledge.

During the Japanese period, many of the Japanese who settled in Tainan for work made notes on living here. Among them were history teacher Maejima Shinji, geography teacher Uchida Isao, and archeology teacher Kokubu Naoichi. The notes made by these Japanese teachers, who served during the 1930s at Tainan First High School (today’s National Tainan Second Senior High School) and Tainan First Girls’ High School (today’s National Tainan Girls’ High School), are not only a critical source for the study of Tainan, but also an inspiration for Taiwanese students and local professionals conducting their own research into Tainan. Mr. Huang Tian-heng, a founding member of the Tainan History and Culture Association, was one of those so inspired.

Serving at Tainan First High School, geography teacher Uchida Isao (1906-1947) was affectionately called “Candle Teacher” because he was tall and thin. During his time in Tainan (1934-1940), Mr. Uchida conducted field research around Tainan. The precious research papers and the photos he took of Tainan’s geographical features are now a collection at MINPAKU in Japan.

Tainaners’ Tainan Study: The Pioneers of the Tainan History and Culture Association

Beyond the Japanese, there were also studies conducted by Tainan natives in the 1930s, from a more local and folkloric perspective, that opened up “Tainan Study.” Such local research into Tainan was, on one side, influenced by the Han “family learning” (jia xue) tradition, and on the other by the methodology used by the Japanese scholars. Shi Yang-sui (1898-1964), the heir of the Shi Ding-mei family, and Zhuang Song-lin (1909-1974) were two of the earliest Tainan locals to organize and transcribe old documents relating to Tainan, as well as the first to systematically research the history and culture of Tainan.

After the Second World War, Tainan County and Tainan City governments formed Tainan Historical Records committees, with many committee members being local culture and history professionals. Later in 1958, the Tainan History and Culture Association – the first registered civil group in Taiwan since the Second World War – was established, contributing greatly to the study of Tainan with solid field research, led in their spare time by members of the association.

In the 1990s, after the end of martial law in Taiwan, non-governmental organizations proliferated. With the central government’s community development efforts, Tainan County Government also established the International Center for Tainan Area Humanities and Social Sciences Research to facilitate the study of Tainan. At the same time, local cultural and historical associations and organizations were forming across Taiwan, and the study of Tainan flourished. This was also when many Tainan experts emerged to capture memories of Tainan from different viewpoints of cultural heritage, literature, music, and theater, as well as pictures, paintings, tea arts, and cultural-creative industries. The unique charm of Tainan still attracts people, from Taiwan and all around the world, to come to this place and forge a collective memory of Tainan.