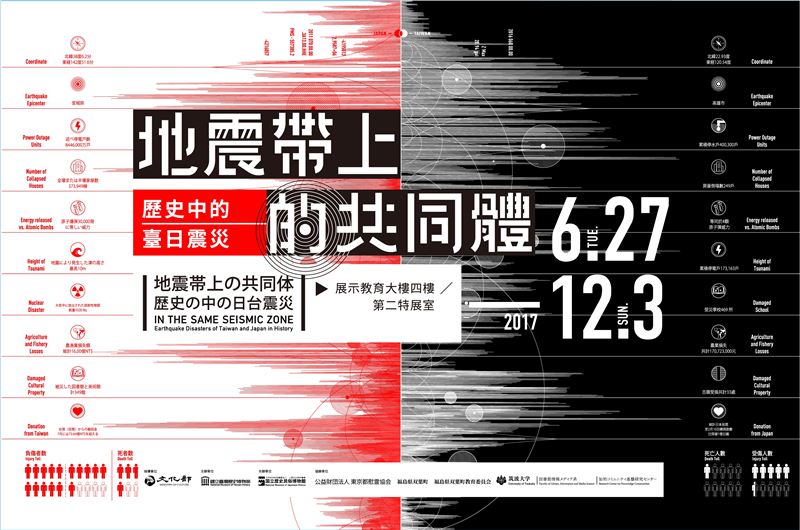 Taiwan and Japan are similarly situated in the Circum-Pacific seismic zone, and thus share a common fate of recurring earthquakes. This special exhibition mainly presents the history of earthquakes in Taiwan and Japan from the 19th century to the present, and how the two regions have faced these disasters and developed their own rescue systems. From the premodern society that tried to explain earthquakes by religion and mythology, to the establishment of modern, national systems, both Japan and its former colony Taiwan have shown how a modern state can mobilize an organized force to deal with natural disasters through national rescue efforts, post-disaster urban reconstruction, and media campaigns. In the contemporary era, whether Taiwan or Japan has important issues besides the operation of traditional national power, such as emergence of the postwar civil society, active performance of volunteers and non-governmental organization, an emphasis on the post-earthquake mental reconstruction, and revitalization of regional cultural communities.Today, in addition to the emergency responses that one might expect when earthquakes strike, more attention is also being paid to preserving the memories of local societies, families and individuals when such disasters occur. The preservation of cultural heritage in this context has thus expanded from a narrow focus on historic monuments to a wider view that takes in the culture and memories of people. The memories of earthquakes have thus become more significant, and so the museum has started to consider how to help the general public in this area, and both preserve and sustain the culture and memories tied to a place after an earthquake has hit it.

The Common Fate of Taiwan and Japan: Earthquake-prone Islands at the Meeting of Tectonic Plates

The western part of the Circum-Pacific seismic zone starts from the Aleutian Islands, then runs through the Kuril Islands, Honshu of Japan, Ryukyu, Taiwan, the Philippines, Indonesia, New Guinea, Solomon Islands, and New Zealand. The eastern part starts from the Aleutian Islands, passes through North America, Central America, and South America. It is a horseshoe-shaped belt zone where about 90% of the World’s earthquakes occur, including 81% of the strongest ones.

A seismic zone refers to the meeting of two or more tectonic plates that collide and press against each other, resulting in an accumulation of pressure and energy. When this energy exceeds the strength of the rocks, then seismic and volcanic activity will occur. Since both Taiwan and Japan are situated within the Circum-Pacific seismic zone, both suffer from frequent earthquakes.

The Fearful Memories of Islanders: Earthquakes and Legends in Taiwan and Japan

Before modern times, there were many legends associated with the occurrence of an earthquake, with most referring to animals, gods, giants, world pillars, and so on, and this is also true for Taiwan and Japan. Taiwan is an island with multiple ethnic groups, and thus it has a greater diversity of such legends. In the early mythology of Japan, earthquakes were mostly considered to of divine creation, but there are also legends about animals. Whatever the legends, the people who lived on these islands had similar memories of these terrible events.

The Important Earthquakes in Taiwan and Japan at the Dawn of Modern Times: The Impact of Earthquakes on Premodern Society

Taiwan and Japan have been struck by earthquakes since the ancient times. However, Taiwan only started to keep more accurate records of such events since the 17th century. Before Japanese rule over Taiwan, which started in 1895, there were nearly 10 large earthquakes that caused widespread death and destruction. Besides the 1815 Yilan Earthquake and the 1867 Keelung Earthquake, the others all occurred in the area south of Taichung. Moreover, Japan, with a relatively denser population, has suffered more than 20 large earthquakes since the 17th century.

In the 1850s and 1860s, Taiwan and Japan were governed by the Qing Empire and Edo Bakufu, respectively. Their long-term peace was gradually disturbed as their original political and economic systems were challenged by internal socio-economic issues and the intrusion of Western powers. Meanwhile, the 1862 Tainan Earthquake occurred in Taiwan, and the Ansei Earthquake of the late Edo period occurred in Japan in 1854-1855.

Japan strived to become modernized after the Meiji Reforms in 1868, and began to expand outwards when some of these goals had been met. After the First Sino-Japanese War, Taiwan became a colony of the Empire of Japan, and therefore the earthquake rescue systems of Taiwan and Japan were somewhat similar at this time.

During the 50 years of Japanese colonial rule in Taiwan, several earthquakes occurred in both areas, among which the 1923 Great Kanto Earthquake in Japan and the 1935 Hsinchu-Taichung Earthquake in Taiwan were the worst. This section will examine the earthquake disasters of this period through these two examples, looking at how the government or the private sector faced these events, along with the issues of information sharing and post-disaster reconstruction, in order to see the differences and similarities between two regions under the same imperial government.

Earthquakes in Contemporary Taiwan and Japan: Building a Social Support System after Disaster

After WWII, several major earthquakes occurred in both Taiwan and Japan, such as the Hsinhua Earthquake in Taiwan of the early postwar period, and Japan’s earthquakes in Nankai and Fukui. There were then no large earthquakes in either county for several decades.

Earthquake in Taiwan in 1999, both resulted in great damage and many deaths and casualties. These disasters not only revealed the need to take anti-quake measures in cities, but also transformed the postwar rescue systems in both Taiwan and Japan through the new efforts to provide mutual support among disaster victims, community reconstruction work, and the establishment of private volunteer systems. Particular attention was also paid to helping reconstruct and strengthen people’s mental states and identities after these disasters.

Taiwan and Japan are both earthquake-prone islands, and throughout their histories such disasters have caused much damage to both life and property Earthquakes can be seen as “vehicles of memory” that represent the past lives of people, involving the important objects belonging to individuals, families or regional societies. Such objects are not only meaningful as cultural heritage, but also tremendously significant for the mental reconstruction of disaster victims during a rebuilding process. After the Great Hanshin-Awaji Earthquake in Japan in 1995 and the 921 Earthquake in Taiwan in 1999, the cultural systems in both Japan and Taiwan thus began to focus on rescuing and preserving cultural heritage in the aftermath of such disasters.

In the 21st century there have been the 311 Great East Japan Earthquake, Kumamoto Earthquake, and the 206 Earthquake in Taiwan, and these events have also highlighted the need to preserve cultural heritage. What can a museum, as an organization dedicated to preserving cultural memory, contribute to this area?

Before the Next Earthquake

People in Taiwan and Japan have learned to live along with earthquakes for a long time, gradually developing some coping skills and a culture of coexisting with such disasters.

In ancient times, people had all sorts of legends about earthquakes. In modern times, Taiwan and Japan once belonged to the same regime. The aftermath of earthquakes can be gradually relieved with the strong intervention of the national power, establishment of a rescue system, and post-disaster urban planning. However, it was only recently that concerns have been raised about the mental reconstruction of disaster victims, and the rebuilding of social and regional relationships.

Among the earthquake measures take were taken after the 1990s, the common features in both regions have been the rebuilding of regional relationships and the participation of non-governmental organizations, like volunteers. Moreover, local residents have been able to speak up and be self-assertive during the rebuilding process. Both the public and private sectors no longer focus only on material reconstruction. From the rescue and preservation of local cultural heritage to the rescue and inclusion of non-designated cultural properties, like private objects marking family or social memories after the 311 Earthquake in Japan, these efforts are very helpful for local societies and residents in the process of rebuilding a region or life. Moreover, cultural organizations, such as the museum, all strive to preserve cultural memories for current visitors and the next generation. The people on these earthquake-prone islands have learned from historical experience and prepared themselves to face the next disaster with a more positive attitude.