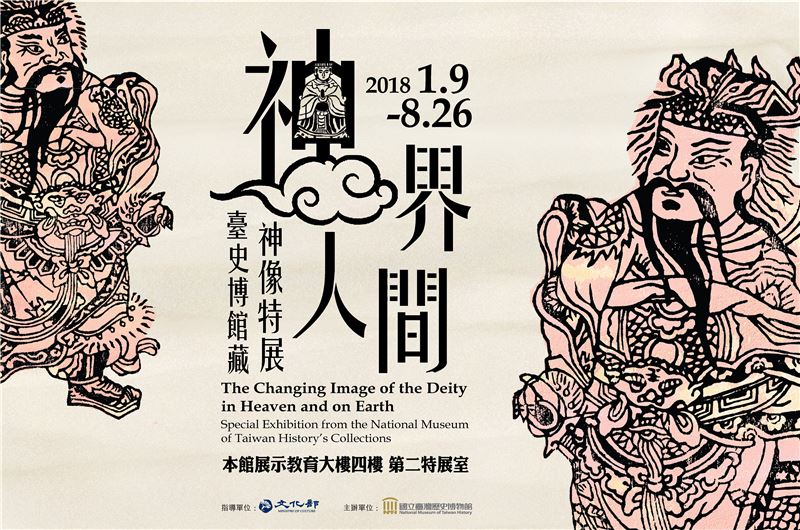 Gods and deities surround us, in heaven and on earth. In the early period of Taiwan's development, Han migrants brought incense and statues with them from mainland China to Taiwan, and slowly these objects became woven into the fabric of daily life in Taiwan. Statues were never merely holy symbols of religion, sitting sedate behind burning incense, but also vessels which carry the life aspirations and supernatural beliefs of people across ages.

This special exhibition uses the National Museum of Taiwan History's broad collections of statues to allow visitors to explore the craft, aesthetic, historical, cultural, and conservation dimensions of these objects.

From intangible gods to tangible icons of gods, the journey begins with deity statues molded to tell the legends of how gods come into being. It is through such effigies that craftsmen are able to concretize abstract conceptions into popular consciousness. Evolving from physical embodiments that then take on expressions and finally become central to sacred ceremonies, so it is that traits of power, vivacity, and ability are attributed to statues, which help to transfer these images of gods into holy symbols worshiped by the common people.

Han migration to Taiwan was divided into four stages. The first stage was sailing across the sea; followed by clearing wild areas for cultivation; settling; and finally expanding. In the early days of Han settlement in Taiwan, migrants would bring effigies or incense with them from their home regions. As well as the local gods from their homes, they also worshiped gods related to navigation, environmental adaptation, and cultivation.

Heavenly Statues in a Human World

As josses lose their direct associations with gods, and lose their religious context, they become items in the human world. They become commodities traded as relics in the marketplace, or featured in museums as artworks, antiques, and historical or cultural items. As they become items held by collectors, these objects change, taking on new philosophies, aesthetics and memories.

We have seen how the image of particular deities has developed through different eras, and how they have become cultural assets that fascinate researchers, museums, collectors, and conservationists. Through technological analysis, preservation management, relic repair work, historical analysis, and fieldwork research, we seek to present to the public the hidden secrets behind these deities. By transforming these statues into items that may be shared with everyone, we hope that the diverse features of these deities may once again be reinterpreted and reborn within a new age.