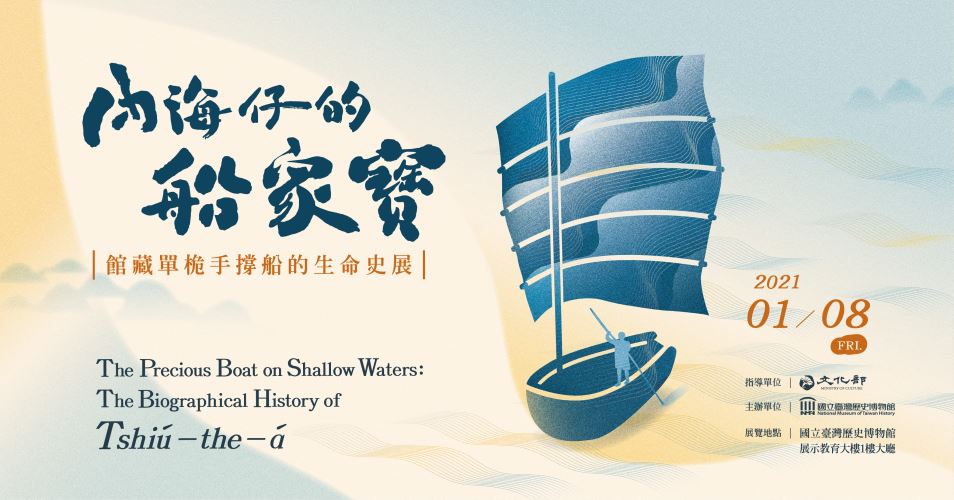 When speaking about boats in Taiwan’s history, the first image that comes to mind is probably that of a bulky cargo vessel sailing through ocean waters. Nevertheless, boats appeared not only on the far-off sea, but also in seemingly familiar surroundings. For over 60 years, a small vessel floated on the waters between Tainan and Anping, and then sailed into this very exhibition hall in the National Museum of Taiwan History.

This exhibition will probe the history of the museum’s key collection item: a single-masted punt called tshiú-the-á in Taiwanese Hokkien. First, we will read its life of twists and turns using the various clues left on the boat, and then revisit the long forgotten intertwined relationship between man and water.

The Grand Line Lies Where There is Shallow Water: 15 Facts About Taiwan’s Shallow Draft Vessels

As Taiwan is surrounded by water, and streams cross the lowlands, people living by the shore, or beside lagoons, rivers, or lakes, often made their living by fishing and transportation. Watercraft in different watery environments have borne different names, and had different functions, but they also shared some characteristics. For instance, most were flat-bottomed, small in size, and carried small amounts of cargo. They were powered by the wind, or by the crew sculling and punting.

Each of these shallow draft vessels reflects how people lived and coped with Taiwan’s hydrological environment.

Punting on The Waters of Tainan: Tshiú-the-á and Tainan’s Shallow Waters

Tainan was the main stage for the appearance of this single-masted punt.

Tainan was once adjacent to a vast lagoon called the Taijiang Inland Sea, which was also known as the lāi-hái-á (literally meaning the inland sea). In order to cope with the sandy and shallow water of the lagoon, shallow draft vessels like the tshiú-the-á became the main vehicle for moving people and goods, making the lagoon a busy thoroughfare. Such a busy scene not only shed light on the lives and commercial activities of the residents at the time, it also captured the cultural landscape of Anping, which resulted in it being selected as one of the Eight Views of Taiwan. This tshiú-the-á, housed in the museum, is a product fully born of interactions between the people and the hydrological environment of Tainan.

The Precious Boat: The Tshiú-the-á Business of the Lin Family from Anping

This tshiú-the-á was one of the cargo punts that belonged to the Lin family in Anping in the early 20th century. The Lin family’s business of operating tshiú-the-á was started by Lin Lao-fu, who transported salt from the Anshun saltern for Mitsui & Co. Lin’s son, Lin Tian-qing, known as “Uncle Qing,” later took over the business. After World War II, he shifted its focus to shipping daily supplies for local residents. The family’s tshiú-the-á business ceased operations in the 1970s.

Tshiú-the-á were once a common sight on Tainan’s waterways, but the one now preserved in this museum is the only evidence of this type of vessel’s glorious past. Its value lies not only in its physical scarcity, but also in its historical and cultural significance.

Reading a Boat: Tshiú-the-á in Perspective

The museum’s tshiú-the-á is 7.9 meters long, 2.08 meters wide, and 0.79 meters deep. The bow and stern are square, with a slightly raised front hull and a flat bottom. In Anping, this was considered a medium-sized tshiú-the-á, and it was probably built there in the early 20th century. From the structure of the boat, we can see that the techniques applied to build this tshiú-the-á were similar to those of traditional sailing boats in Fujian, China, which can be considered typical of Han people’s shipbuilding methods. The various generations of the Anping Lin family also left some marks on different parts of the boat. It is the structure, parts, and blotchy marks on the boat that tell us the stories of its life.

Moored at the Museum: The New Route of the Tshiú-the-á

In the late 1970s, this tshiú-the-á ceased its work, and remained moored on the south bank of the Yanshui River. It even sank for some time. Luckily, not long after, it was rediscovered and was given a new mission: to continue its course through time.

The Biographical Story of Objects and Our Stories

This single-masted punt, born out of the shallow waters in Anping, Tainan, was blown by the wind and poled by people to transport salt and goods for three generations of the Lin family. It was a vital vehicle in the business of water transportation, as well as a key component on the human and material networks criss-crossing the waters of Tainan. Following geographical and social transformation, it bears not goods but stories, histories, and memories of the land. The National Museum of Taiwan History might be where it is now moored, but its life will certainly extend beyond this place, and its stories will be passed on to unexpected audiences.

The cargo on the boat might change, but the history and the relationship between water and Taiwan’s people are permanently tied to the boat. Like the tshiú-the-á, there are many more boats in Taiwan shipping not only goods and materials, but also recollections, historical clues, and even heart-warming thoughts and hopes.。

The biography of each boat is our biographical story.