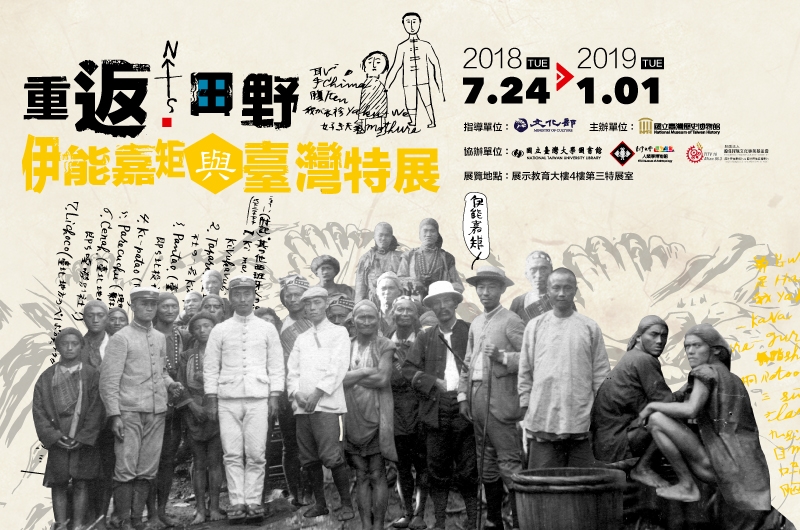 What was it like to live in Taiwan's diverse society 120 years ago?

In this exhibition, we will follow the footprints of Ino Kanori (1867–1925), an anthropologist from Tono, Japan. We will look at the notes he took when doing field research, his other writings, and records of his reports examining the cultures and societies of the Han and the indigenous peoples of Taiwan 120 years ago.

Through the eyes of Ino Kanori, the energy and diversity of Taiwanese society more than a century ago come alive. Through the fruits of his research, we can trace the extraordinary vitality of this island's various cultures.

The Age of Transformation

During the late 19th century, Taiwan went through a series of transformations as it was impacted by international political and economic change. These caused new developments in the island's politics and economics, as well as its social and inter-group relations. After the Japanese takeover of Taiwan in 1895, the modern political institutions and scientific knowledge that accompanied its rule deeply affected Taiwan and opened up new understandings of the land.

As Japan expanded its power, young Japanese explorers such as Torii Ryuzo and Ino Kanori were inspired to seek adventure abroad.

After the First Sino-Japanese War of 1894–1895, Taiwan was ceded to Japan and became a new territory of the Japanese Empire. The island became a destination for study by Japanese academic explorers and researchers. The anthropologist Ino Kanori was one of them. He spent 10 years living in Taiwan, and made the study of Taiwan his lifelong vocation. He published a great number of scholarly texts about the island which even now continue to influence our understanding of the cultures, inter-group relations, and history of old Taiwan.

Writing down his observations by hand, traveling on foot, and observing society with his own eyes, Ino left traces of his time in Taiwan all over the island, including in Taipei, Keelung, Yilan, Taoyuan, Hsinchu, Miaoli, Taichung, Nantou, Chiayi, Tainan, Kaohsiung, Fengshan, Pingtung, Taitung, Hualien, Penghu, and Lanyu (Orchid Island).

Whether on the plains or in the mountains, Ino documented the languages that were spoken in Taiwan, studied customs, and collected specimens. He researched the origin stories and migration history of various ethnic groups; he also systematically categorized those groups by establishing records of their histories and of the development of diverse indigenous communities.

Indigenous Groups in the Eyes of Ino

With the ambition of understanding Taiwan, Ino set his heart on Taiwanese indigenous studies. His efforts eventually bore fruit in his classification of the island's indigenous groups.

In addition to collecting literature, Ino also observed and interviewed people and documented all manner of folk customs. His studies of the religious beliefs of Taiwanese Han society stand as the earliest systematic research on the island's folk religions.

Ino Kanori, who studied Taiwan and established a foundation of knowledge about the island, is now the one being studied and critiqued – as well as being appreciated and represented in diverse cultural performances.

In the past, Ino Kanori examined Taiwan. Now, it is our turn to examine Ino.