Sing A Song: Taiwan in Sound 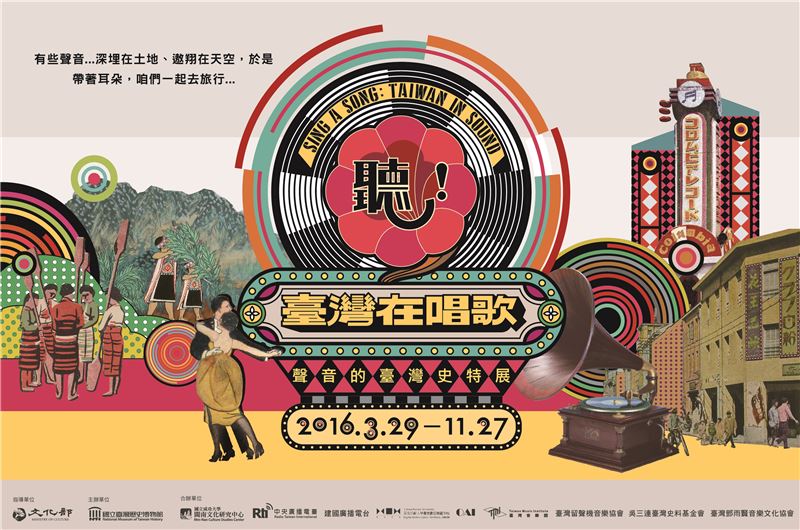 From vinyl records, magnetic tapes to digitized recordings, as science and the recording industry developed, modern society has been filled with a variety of sounds. These overlap to create a symphony of sound.

In 1914, Taiwanese musicians made recordings in Japan, and the first batch of Taiwanese music records was released. By the 1930s, the recording industry had become well established. At the same time, anthropologists doing field research also made audio recordings. As a result of both economic development and academic research, sound recordings of historical significance started to be accumulated and preserved.

Through a wealth of historical sound recordings, we can hear a great many wonderful stories, and come to the sudden realization that Taiwan has continued singing all this time…

The quantity of historical sound recordings is enormous, and the range is boundless. Music is certainly the main subject. Beautiful voices have been recorded, distributed as commodities, then passed on as cultural heritage.

The Centennial Wall of Taiwan Musicians documents those who made outstanding achievements in all areas of music, including traditional theater, academic, and popular music. Their creativity and performances have been significant memories for every generation.

In the endless array of music, popular music contains the most commercial voices, and is each era's distinctive signature. As Taiwanese popular music has evolved, it has epitomized local society. We have selected these albums because each marks a different epoch and represents a different generation, while featuring the most splendid stars in the history of Taiwan's musical development.

Sounds from the Fields

From the 1920s, anthropologists, musicologists and linguists entered the mountains of Taiwan with recording equipment to record the sounds of Taiwan. In keeping with scholarly research, these recordings are diverse and meticulously annotated. They deserve attentive listening, as through them we can smell the air of the wilderness, 50 or 80 years ago.

Sounds of the Times

In the past, we often tried to learn history through written documents and images. However, a crucial sound belonging to society's collective memories might better trigger human emotions. These historical footsteps are evidence of our mutual experiences, leading us to travel through time and space.

Mr. Yang Zhao-jia, a pioneer of Autonomy Movement in the 1930s, delivered speeches in which he expressed the aspirations of his Taiwanese compatriots. The social predicaments and expectations he spoke about have remained inspirational to this day. Propaganda songs endorsed by the government and major social organizations – and by leaders such as Dr. Sun Yat-sen, Chiang Kai-shek, and Chiang Ching-kuo – were broadcast via radio or played at schools. They were an important link in public education at that time, and are part of the audio memories of various generations.

Many underground voices, prohibited by the government, circulated in society. The album-release inspections of the 1930s, review regulations enforced since the 1970s, and Martial Law (not lifted until 1987), were used to ban entertainment music during wartime and certain dialects after World War II. However, surveillance and broadcasting rules could not restrict the voices in people's hearts.

Socially realistic songs, such as Roaming the Streets in 1935 and Jobless in 1964, reflected people's concerns. Through humorous lyrics, they expressed social discontent during periods of economic recession.

Many recordings have, on purpose or by accident, preserved special life situations in different eras. In particular, recordings of the long-existing Taiwanese Laughing Drama are not only interesting in themselves, but also reflect the lifestyles of different generations.

The Beauty Hall of The Taiwan Expo is a very rare set of albums. In 1935, the Taiwan Expo was organized by Taiwan Governor-General Office, and local artists created this story to depict the event from the perspective of ordinary people. Patriotic lottery tickets were common, yet are now historical documents. What kind of dream worlds did a simple lottery ticket build? Do the songs of Guo Da-cheng tell us how a love letter was written in the 1960s? How did 1970s TV commercials enter daily life and initiate a new consumer era?

These frolicsome voices reflect the lives of ordinary folk, and have turned into historical recordings.

After listening to so many historical sounds, let's have some fun! Create your own voice!